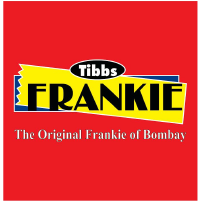 In the year 1967, Mr. Amarjit Singh Tibb tasted a Lebanese delicacy prepared from pita bread and a whopping variety of stuffing, at Beirut. Enraptured by what his taste buds had experienced, he returned to India.

He realized the Indian palate was ready to experience this remarkable roll with its sumptuous stuffing. His resolute wife Mrs. Surinder Tibb by his side, they experimented for a year to create a perfect blend of curried meats and vegetables that would fill the wrap. This led to the discovery of a phenomenon called “Frankie”, its USP being the Frankie Masala.

It was introduced to family and friends, who sang praises for the innovation. And Tibb’s Frankie was born. Launched in Mumbai (year – 1969), it went on to conquer India revolutionizing the Indian fast food market.

The name Tibb’s went on to become synonymous not only with Quality and Taste, but also with Value for Money. Rest assured, it remains the same till date.

Tibb’s Frankie was registered as a trademark by Tibbs BAR-B-Q which now has its presence all over India.

GVK One Mall is the most exclusive shopping mall and entertainment center. Located in Banjara Hills, best known for its high-end stores and restaurants.